Another long break between postings. Exciting new developments include our purchase of a lovely holiday home at Flamborough. It’s a shingle-clad chalet just two minutes walk from the sea. It’s situated in a quite unique settlement and we’ve been trying to find our own place there for a long time. It looks quite humble on the outside but it has lots of space inside including two bathrooms and three bedrooms. 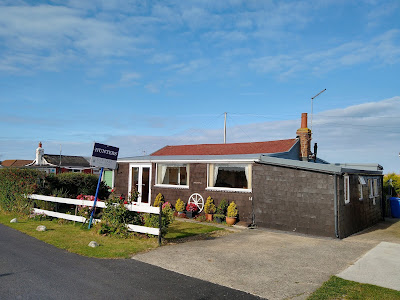 From our kitchen window we can see people walking on the cliffs. 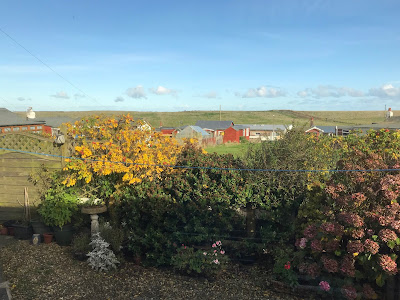 And we can get a breath of sea air in a matter of moments! 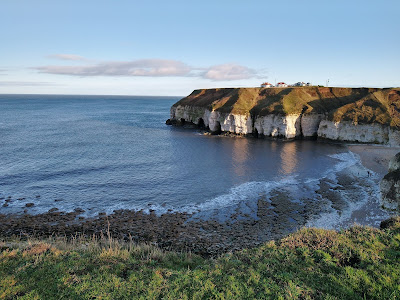 We’re hoping to give the chalet a lovely seaside feel. We’ve created spaces for lots of nautical knick-knacks. 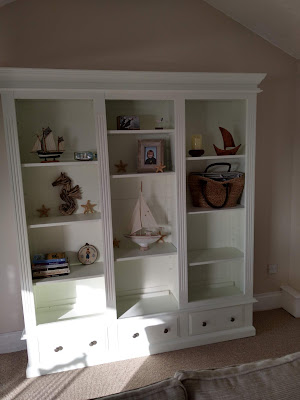 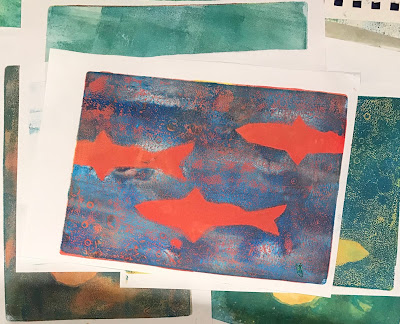 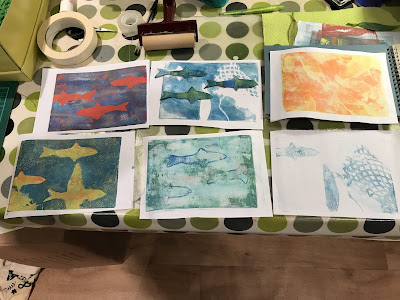 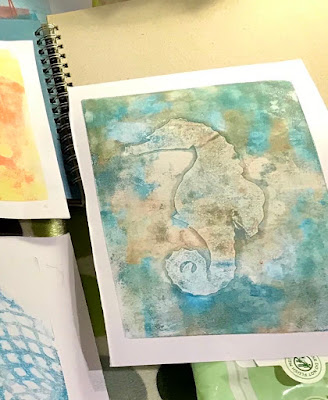 The last one here - the seahorse ‘ghost’ print - will probably be framed and used in the chalet.

Nicky is carving a name plate for our new name Breil Nook (named after a local feature). 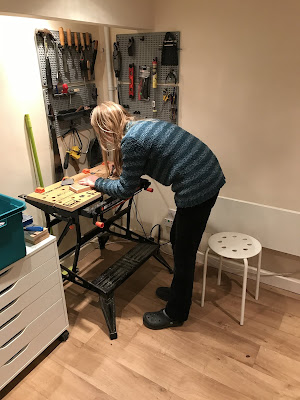 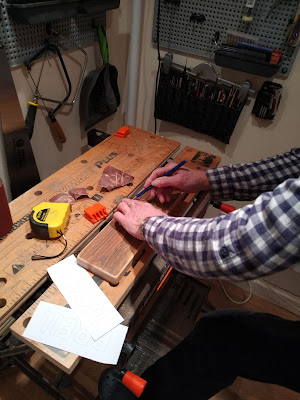 Posted by dennysaze at 09:20 No comments:

Here I am again! Ive had quite a pause from anything really creative (apart from cooking) partly due to a broken right arm but mainly due to being out and about.

I've recently, however, been experimenting with digital art software. I want to create illustrations that might work in a planned bird book showcasing Nicky's wonderful bird photographs. I've also got some ideas about creating an illustrated children's book after taking part in a free online university course on 'Pictures of Youth' with Future Learn.

Nicky bought me a new iPad for Christmas and an Apple Pencil. I downloaded the app 'Procreate' and a text-addition app 'Over'.

Using some free online tutorials I learned some basic ways in which to create illustrations. In a nutshell, I use layers to trace the basic outlines of a photograph and I then use colour references from that photograph to built an appropriate palette. My aim was to create stylised bird pictures.

Here's my first attempt from Nicky's picture of a bullfinch. 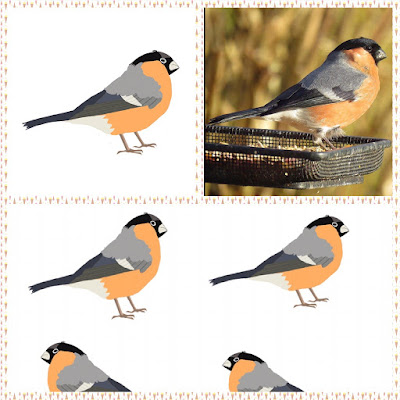 This was followed by a robin - customised for a Valentine"s Day card. 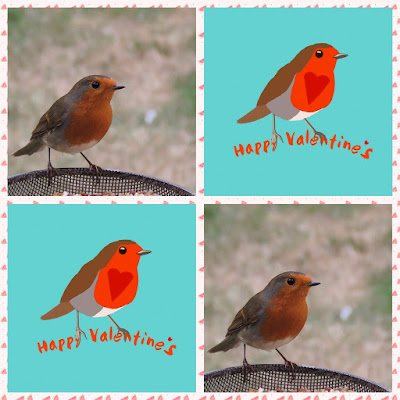 Then by a puffin from a photograph Nicky took at Flamborough. 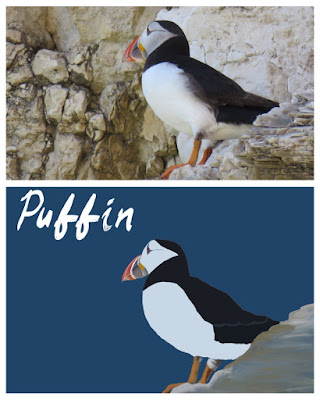 Here's a film showing the creative process I went through.

You can just start to see here - on the puffin's legs - the temptation I felt to add more painterly detail.
I succumbed more to this temptation in my next drawing of a Merlin (from an online picture). I think this fell a little between two stools (not pigeons!) in that it's not impressive as a painting but not stylised enough to be a 'cartoon' type representation. 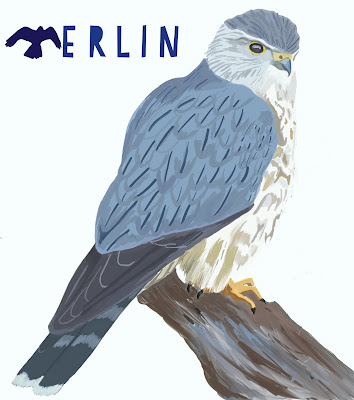 Ive got even more painterly with my latest bird picture (still in draft form) of a blue tit. 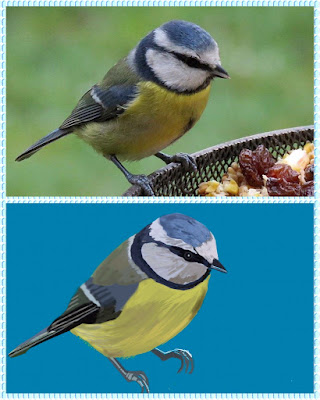 Time to pause and refine my skills!
Posted by dennysaze at 06:57 No comments:

I've now settled on an interior image for my puncture tin. It's of the road outside my sister's seaside home. I may alter the image in future tins. I found a 'bike' quotation from Billy Connolly to use on the collage and typed it in my favourite new font onto brown 'paper-bag' style printing paper. I've yet to glue the objects on, but a friend has already asked to buy the collage when it's finished so that'll give me an incentive to get on with it! 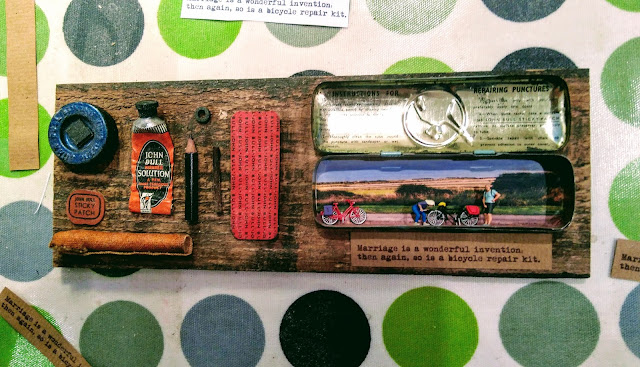 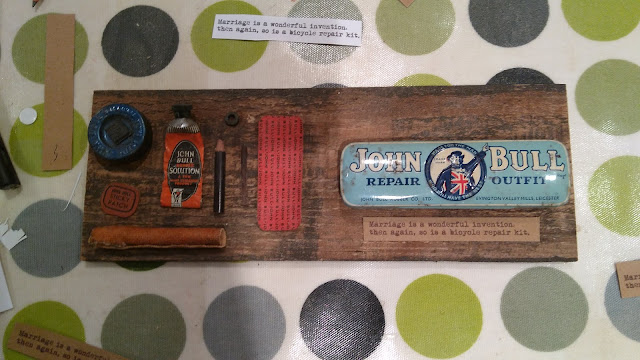 Posted by dennysaze at 09:56 No comments:

Ive been experimenting with making 3-D paper-cut interiors for my tins. For a while I've had a really pretty Czech cigarette tin with an image of a princess on the front (and the image coming through on the inside of the lid). 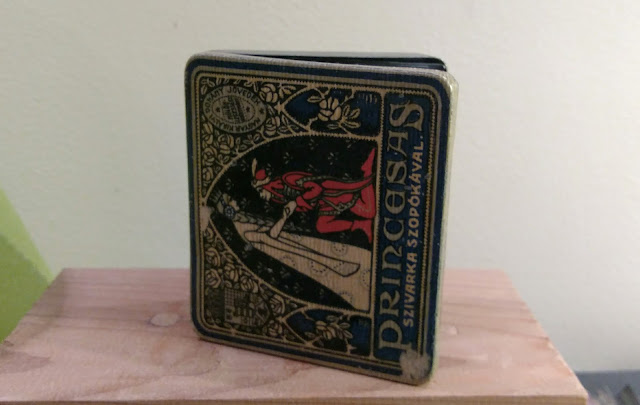 I also found a black and white picture of a castle by Aubrey Beardsley which I thought would work really well with the monochrome image on the back of the lid and with the theme of the tin. The image is an illustration from an edition of Le Morte d'Arthur. I printed several copies onto card and tried to cut them in layers to give the 3-D effect. I used foam pads to separate the layers but the end result wasn't quite what I was looking for. 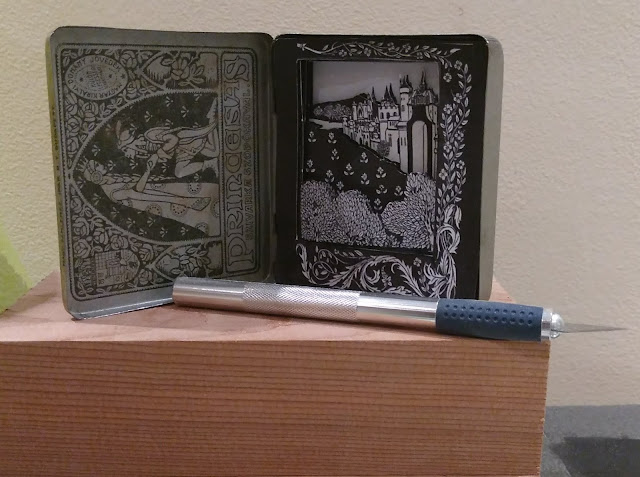 I'm going to try again with a different sized tin. I sent for a knight in shining armour to put in the foreground. Again not a huge success. He was too big and arrived without his horse! I hadn't realised that when the sellers said the figure came without a mount that meant the horse wasn't included!

I used my new fonts on the inside of a new tin. This is a rather romantic tin inspired by St Valentine's Day and by an etching made by William Blake. I used a copyright free image for the interior and altered the colours to make the two sides of the tin tone in with each other. 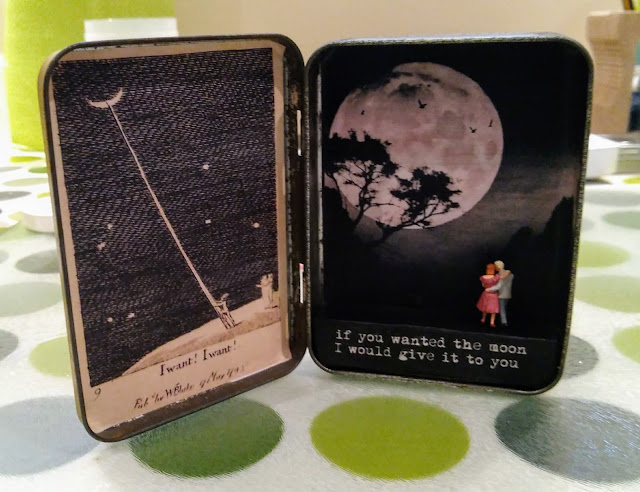 I wasn't sure whether to have the couple facing towards the moon or facing outwards. I took advice from Nicky and my daughter Katie and here is the result! I'm planning a variation with two parents and a small child and the text: 'if you wanted the moon we would give it to you'. This was an easy tin to make: Nicky made the wooden insert which I wrapped in my printed paper. The exterior doesn't really match - but, as one of many 'Three Nuns' tins I have, it was cheap! It's Nicky's favourite tin so far!
Posted by dennysaze at 09:19 No comments:

I wanted to find some new fonts that would add to the vintage feel of my tin artwork. Not being a very adept IT person it took me an hour or so to work out how to add fonts to my Pages menu. Some font additions can be cut and actually pasted onto images. I also want to play with combining images and font online.

Here is a picture I've been saving for a tin, wall plaque or as a basis for a lino-cut with the added font and my caption. 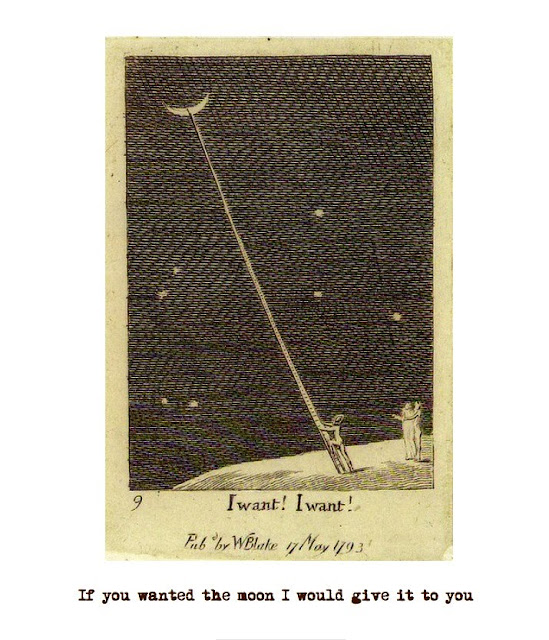 Here is another use of the font. This time with an image I found online and gave a pen and ink effect using an art filter. 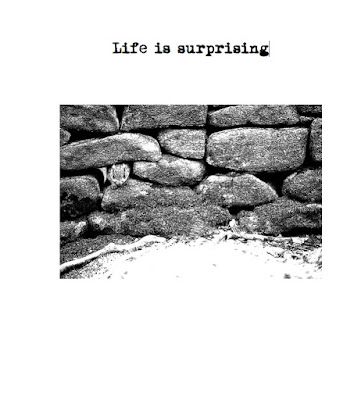 The actual process of incorporating the new fonts onto my Pages font list took a little thought and effort. I used this advice. An afternoon has just vanished whilst I've been fiddling with all this technology. Still - it's pretty murky outside and Nicky is down in the workroom creating another lovely little wooden animal so it was a good time for time-wasting!

Posted by dennysaze at 08:13 No comments:

One of my next projects is to create a little diorama or collage using old puncture kit tins. I'm assembling some ideas but need to seek out a few lines from a poem about cycling. I can't remember the poem I originally found!

If it's possible, I'd like to make a collage using the contents of the tins in a little display alongside the tin diorama. I've already got some tiny cyclists to put inside the tins! One figure is mending a puncture so it's particularly fitting! 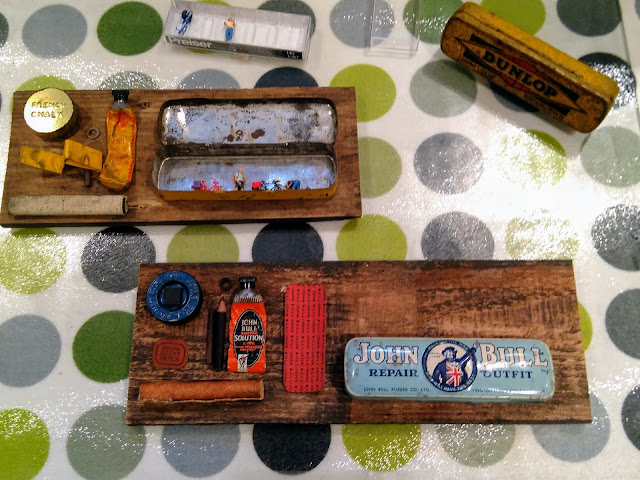 Not sure though if everything will stick on in such a way as to allow the hanging of the collage - and the opening of the tins!
Posted by dennysaze at 06:33 No comments: